Earlier this Spring I received a commission from the Upper Nidderdale Landscape Partnership and Nidderdale Visual Arts, organisations concerned with cultural heritage conservation and arts access in the dale, to work with a group of KS2 children from Hampsthwaite CE Primary School. The project was inspired by Robert Macfarlane and Jackie Morris’s ‘The Lost Words’, a book written as a reaction to news that nature words are disappearing from children’s dictionaries to be replaced by words relating to technology and the virtual world.

The Lost Words of Nidderdale project involved taking the children to Fishpond Wood in Bewerley, encouraging them to pay attention to and make creative responses about the nature they came into contact there. Subsequent workshops resulted in the creation of silk & mixed media artwork and associated poems. Throughout the process we have been fortunate enough to have had responses from Robert Macfarlane via twitter, which he has been kind enough to allow me to include in a booklet I have put together for the project. 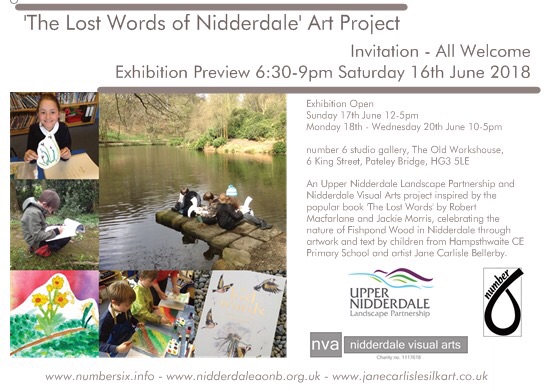